The biggest wine competition in the world has confirmed the quality of the new AULA range by awarding it three gold medals, won by Aula Blanco Verdejo, Aula Blanco Macabeo-Sauvignon Blanc and Aula Rosado Bobal. The other four medals were awarded to Coviñas wines aimed at the international market.

The most prestigious International Organisation of Vine and Wine (OIV) competition in the world and the largest wine competition in Germany has recognised the quality of the Coviñas Group’s wines with the award of seven new gold medals. It is worth noting that three of these medals were awarded to wines in the new AULA range, which has been well received by the market since its launch and is looking to take another major step forward when the hospitality sector opens up again this summer.

So, Aula Blanco Verdejo, Aula Blanco Macabeo Sauvignon Blanc and Aula Rosado Bobal have a new medal each to add to their collection. Their success has particularly caught the eye of the hospitality sector, drawn to the brand both by the image of the range, which depicts the land and the winegrowers who work it, and also by the seal of approval which the medals won at this prestigious competition represent. Every year, this competition brings together eminent specialists from all around the world and puts an upper limit on the number of wines that can take part, so ensuring that these are top quality.

And the seventh gold medal was won by Requevin Tinto Reserva. This wine is made from Tempranillo, Bobal, Cabernet Sauvignon and Garnacha grapes. It is aged in oak casks and is a full-bodied, expressive wine, which combines fruit and freshness with added elegance born of the time spent in cask, offering hints of toast and eucalyptus.

The Berliner Wine Trophy has become the world’s biggest and most important international wine competition, under the patronage of the OIV and the UIOE. Every year it brings together eminent experts from every corner of the earth. With a self-imposed limit of 7,000 wines for tasting at every edition (it is held in February and July), it is the first international wine competition to have introduced an entry limit for quality reasons.

The International Organisation of Vine and Wine (OIV) awarded its sponsorship to only 27 wine competitions around the world in 2019, so its patronage of the Berliner Wine Trophy is one of the highest accolades that a wine competition can receive.

The tastings are not only under the aegis of the OIV, but are also overseen by the International Union of Winemakers (UIOE) and carried out under notarial supervision. The DWM’s Berliner Wine Trophy competitions are among the most strictly supervised in the world.

was last modified: May 6th, 2021 by Grupo Coviñas
Previous

Bodegas Coviñas enjoyed one of its most memorable moments this week as, in addition to topping the…

Coviñas wines have won 5 medals at Asia’s largest competition, the Asia Wine Trophy. With over 4,300… 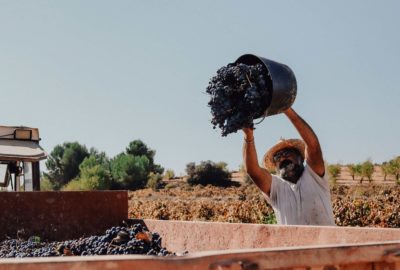 Matching music and wine for the September back to work blues

The September blues (what the Spaniards call uphill September, also used of post-holidays January) are here. These…